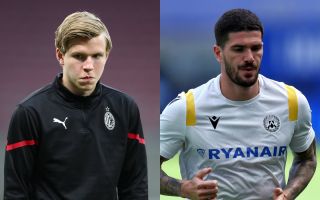 Tuttosport: Milan could use Hauge to lower €40m price tag of Udinese star

Milan are looking to improve the squad ahead of next season as they finally will take part in the esteemed Champions League. Although they have many good players already, the extra budget will get them a few more.

According to Tuttosport (via MilanLive), one of the players on their wist list is Rodrigo De Paul. With 9 goals and 10 assists in the league, he was a key player for Udinese this past season. The only problem is the alleged €40m price tag.

The idea of Milan, therefore, is to include Jens Petter Hauge in the deal as a technical counterpart. The Norwegian youngster impressed this past season but didn’t play much towards the end of it, despite scoring in his last few minutes on the pitch.

Per the report, Hauge could be the perfect inclusion as Udinese are interested in him, which you can understand given what he’s shown. It remains to be seen if it would be a permanent departure or just a loan, but the former seems likely.