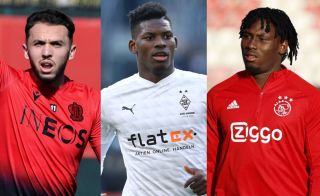 AC Milan are in the market for a new striker this summer and have targeted six young players in particular, according to a report.

Zlatan Ibrahimovic should be Milan’s main man again next season even if he managed just 27 matches in total in the season just ended, with a haul of 17 goals and 3 assists. Stefano Pioli will carry on with him, with the hope of having the Swede physically intact, but there is increasing speculation that Olivier Giroud will arrive.

Today’s edition of Tuttosport (via MilanNews) reports this morning that there is optimism about the arrival of Giroud, but Milan are searching for a third striker who is young and can grow, listing six players who are targets.

Myron Boadu of AZ Alkmaar, Odsonne Èdouard of Celtic, Breel Embolo of Borussia Moenchengladbach, Amine Gouiri of Nice, El Bilal Touré of Stade Reims and Lassina Traoré of Ajax are all on the list, and all would cost no more than €15m.