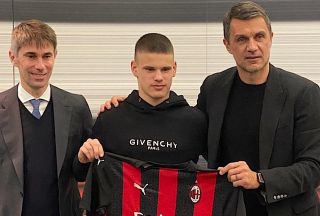 Tuttosport: Milan have high hopes for Kerkez – ‘Theo Hernandez already has his heir’

AC Milan’s last signing of the January window went under the radar somewhat in Milos Kerkez, but it seems the club have big plans for him.

The 17-year-old Hungarian left-back joins from ETO FC Gyor and will initially be part of Federico Giunti’s Primavera, though the player’s agent has been told that he will be considered for the first team and as a back-up to Theo Hernandez in time.

Kerkez is the latest child of Milan’s work in the scouting sector. Chief scout Geoffrey Moncada – a man who rarely shows himself to the public – continues to work on a long list of names, moving concretely for the ones he feels are right.

Today’s edition of the newspaper Tuttosport (via MilanNews) goes with the headline: “Milan look ahead with Kerkez: Theo Hernandez already has his heir.”

The paper explains that the teenager will indeed start his life at Milan playing under Frederico Giunti in the Primavera, but the hope of the management is that he will soon develop and integrate, becoming the deputy to Theo on the left.