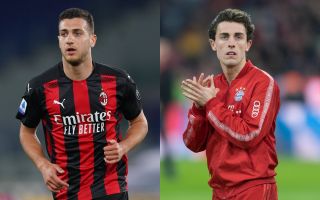 Tuttosport: Milan have Real Madrid man lined up if attempt for Dalot fails

Alvaro Odriozola has been linked with Milan in the last few weeks and it seems he could become a concrete target for the club. However, the priority remains to extend the loan of Diogo Dalot from Man Utd.

According to Tuttosport (via MilanNews), the Rossoneri are in talks with the English side to keep Dalot for at least one more season. However, the problem is that they want to monetise the departure of the Portuguese full-back.

Milan, meanwhile, are looking to use the loan with an option to buy formula and perhaps agree to the €18m asking price that way. Should they fail to reach an agreement with Man Utd, then the alternative is Odriozola.

The relations between Milan and Real Madrid are very good and it seems the Spaniard could arrive on a loan deal. He could, therefore, be the perfect solution for Paolo Maldini and Ricky Massara if their initial plan doesn’t work out.

READ MORE: Four and a half seasons at Milan – Ibrahimovic’s loyalty is admirable