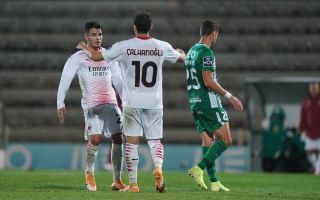 AC Milan have two potential replacements in mind for if they are forced to say goodbye to Hakan Calhanoglu, according to a report.

Tuttosport (via MilanNews) gave an update on the Calhanoglu situation earlier today, reporting how Milan are ready to offer a salary of €3.5-4m per year but they will not go above that, given the economic problems that have hit all football clubs after the pandemic.

Calhanoglu who has always made it known that he wants to stay with the Rossoneri for a long time, but it will all come down to the talks that take place today at Casa Milan and he will have to lower his demands.

In the same report they go on to mention that if an agreement is not reached in the coming months, Calhanoglu could leave on a free transfer and certainly has no shortage of admirers, with Manchester United and Juventus chief among them.

Milan do not want to be caught unprepared in the event that the negotiation for the renewal of Calhanoglu were to fall apart, and for this reason they have their eyes on several profiles.

The two mentioned in the report are Dominik Szoboszlai of Red Bull Salzburg and Papu Gomez of Atalanta, even though pretty much every news outlet is now reporting the former is Leipzig-bound.