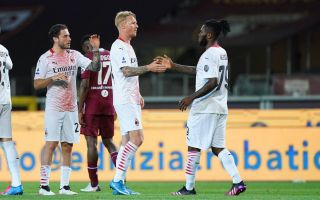 Tuttosport: Milan hoping to reach agreement over renewal of key duo in next few days

AC Milan are looking to close the renewals of two players considered vital for the club’s project, according to a report.

This morning’s edition of Tuttosport (via MilanLive) writes that there should be an acceleration of the negotiations regarding the renewal of Franck Kessie after his return from the Olympics in Tokyo. A recent meeting in Bologna between Frederic Massara and his agent George Atangana brought the parties closer, and the player’s will is to stay at the club.

He should be back in training by midweek and Milan have offered €6m net per season including bonuses. Though some details remain to be filed, the feeling is that we are moving towards a full agreement.

Another player who also wants to stay is Simon Kjaer, and there have been positive contacts between the management and agent Mikkel Beck. There should be an increase in salary from €1.2m net per season to €1.5m, and the only doubt is whether it will be a two-year renewal or one year with option for an extension, given he is 32 years of age.

In any case, it is easily conceivable that an agreement will be found without particular problems as the parties want to continue together.