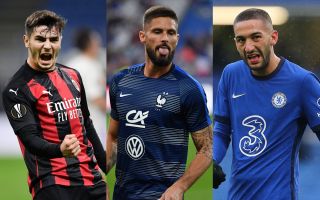 Tuttosport: Milan in talks with Chelsea and Real Madrid – from Diaz to Ziyech

Milan are looking to reinforce their squad ahead of next season and have already opened talks with several clubs. Chelsea and Real Madrid are two of them, with which more than one deal could be made this summer.

According to Tuttosport, as cited by MilanNews, the Rossoneri have struck up an axis with these sides for this mercato. Both Chelsea and Real Madrid have some redundancies and Paolo Maldini is ready to pounce.

As for the Stamford Bridge side, Milan have already signed Fikayo Tomori from the club on a permanent deal. They are also in talks over Olivier Giroud, who perhaps could free himself and arrive on a free transfer.

Tiemoue Bakayoko and Hakim Ziyech have also been mentioned as targets of the Rossoneri, with the latter player being an option for late August. And at Real, the main target for Milan is Brahim Diaz, set to return on loan with a €25m option.

Should the Rossoneri fail to sign Giroud and Dalot, then they could turn to Luka Jovic and Alvaro Ordriozola on loan, which the Bernabeu side seem open to. The final name from the Spanish side is Dani Ceballos, who could replace Hakan Calhanoglu.