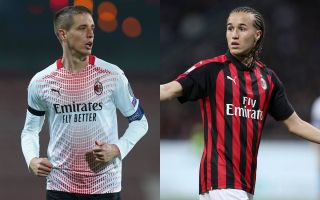 Tuttosport: Milan must sign two full-backs as unwanted duo will leave this summer

Milan have a bigger budget this summer thanks to their Champions League qualification, but not all of the signings will be spectacular. They need a few squad players as well, with two positions highlighted.

According to Tuttosport (via MilanNews), Andrea Conti and Diego Laxalt will return from their loans at Parma and Celtic respectively. However, Milan have no intention of keeping them and will thus part ways with the duo this summer.

This also means that the Rossoneri will need a new right-back deputy, although Pierre Kalulu is a right-back by nature. The young Frenchman has been used mostly as a centre-back and impressed there, so that could be his position.

As for the left side, Diogo Dalot has returned to Man Utd and won’t be able to cover for Theo Hernandez anymore, although he could return to the Rossoneri. Milan used the Portuguese youngster for both flanks, but now two signings are most likely needed.

READ MORE: Atletico could take important steps ‘in the next few hours’ for €40m Milan target