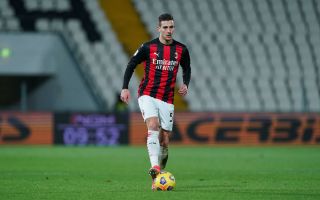 AC Milan are leaning towards not trying to sign Diogo Dalot from Manchester United on a permanent deal, according to a report.

The Portuguese full-back arrived from United on a season-long loan with no option or obligation to buy, meaning negotiations would be needed if Milan wanted him to stay beyond June with the English side free to name their price.

Tuttosport writes this morning (via MilanLive) that Dalot may return to Manchester at the end of the season as the Red Devils want €20m to sell the Portuguese and Milan are already be looking around for his replacement.

In fact, the source even adds that the club have identified Brazil international Emerson Royal – owned by Barcelona but on loan at Real Betis – as the ideal man for the right-back spot.

The future of Andrea Conti also remains in the balance as he left for Parma on loan with option to buy at €7-8m which becomes an obligation if they stay up. However, it cannot be excluded that in the end Milan could decide to focus on Kalulu as the deputy to Calabria.

READ MORE: Ibra and Pioli’s message to Milan is clear – a strong, clear and immediate reaction is needed