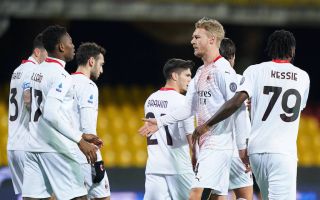 AC Milan were able to battle against the circumstances and get the job done against Benevento, earning a number of players praise from Tuttosport.

In their player ratings (via PianetaMilan), Simon Kjaer was given the title of man of the match with the following comment: “He comes back after five league games missed due to injury and proves he hasn’t lost the form he had then. Monumental.”

Head coach Stefano Pioli was also given a score of 7 for his method in adapting to Sandro Tonali’s red card: “The Rossoneri coach is absolutely a competitor, he took off a player who could hold the ball and pick up the team. But Leão’s incredible goal in the second half confirms the validity of the choice.”

Gianluigi Donnarumma got a 6.5 out of 10 and while he has no specific merits on the penalty which was dragged wide, Caprari will have seen in his head the save on Immobile against Lazio and went looking for the corner too much.

Davide Calabria and Franck Kessie received the same mark, with  the latter scoring the penalty to open the scoring with his 5th goal in the league already this season.

Brahim Díaz got a 6.5 too as he was close to scoring before being sacrificed only for tactical reasons, while Hakan Çalhanoğlu – who hit the post – and Rafael Leão got the same scores.

Alessio Romagnoli, Ante Rebić and Samu Castillejo got a 6, while it was a 5.5 for Diogo Dalot. Among the negative notes were Rade Krunić (5) who gave away a penalty and Sandro Tonali (4.5) who was sent off.