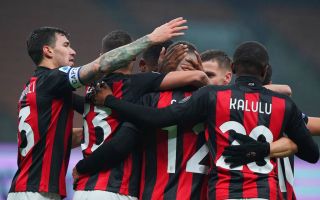 Theo Hernandez received all the plaudits from Tuttosport for his performance in last night’s 3-2 win over Lazio.

As Inter managed to beat Hellas Verona earlier in the evening, the pressure was on Milan to keep their lead at the top of the standings. It started out well, with two goals, but then they conceded two and Theo Hernandez was forced to come to the rescue.

The Frenchman scored a last minute winner from Hakan Calhanoglu’s corner to make sure the Rossoneri enter the Christmas break top of the pile.

Tuttosport (via MilanNews) rewards the left-back with a rating of 7.5 out of 10 in their player ratings. Meanwhile, Donnarumma and Calhanoglu also did well and both were given scores of 7.

Calabria and Rebic both received praise too as they were given scores of 6.5, while Romagnoli, Krunic, Tonali and Leao each got a 6.

Castillejo was marked down (5.5), as were Saelemaekers and Kalulu (5), with the latter having had a hand in both of Lazio’s goals.