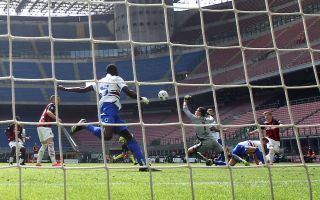 There were only a handful of positive performances for AC Milan during the frustrating 1-1 draw against Sampdoria at San Siro.

The Rossoneri dropped yet more valuable points at home as Jens Petter Hauge’s late equaliser was needed to snatch a draw against a Sampdoria side who had taken the lead through Fabio Quagliarella and played the last 30 minutes with 10 men after Adrien Silva’s red card.

Tuttosport (via MilanNews) have published their player ratings for the game, and they have given Hauge the award for best Milan player with a rating of 6.5 after his equaliser and impact from the bench. The same score was given to Gianluigi Donnarumma, Simon Kjaer and Fikayo Tomori, while scores of 6 were given to Pierre Kalulu, Franck Kessie, Sandro Tonali and Ante Rebic.

From there, only struggles: Zlatan Ibrahimovic and Ismael Bennacer get a 5.5, while Alexis Saelemaekers, Samu Castillejo, Hakan Calhanoglu and Rade Krunic got a 5. The worst was Theo Hernandez as the French full-back got a 4.5 for ‘an unforgivable mistake’ leading to Samp’s opener.