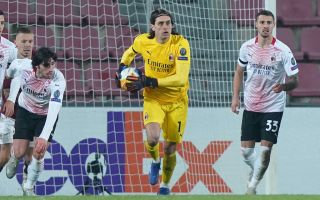 Tuttosport: Milan player ratings for win over Sparta – plenty of positives but defender is criticised

Jens Petter Hauge and Ciprian Tatarusanu were picked out for praise thanks to their contribution in last night’s win over Sparta Praha.

Despite 10 changes to the starting XI from the win against Sampdoria at the weekend, Milan were still able to beat their Czech opponents 1-0 thanks to Hauge’s goal

Today’s edition of Tuttosport (via MilanNews) carries their player ratings for the game, and the highest score (7) was given to Tatarusanu and Hauge. The goalkeeper made two decisive saves on Krejci and Karlsson, while the young Norwegian scored his third goal in his last four games.

There were positive performances from Pierre Kalulu, Diogo Dalot, Sandro Tonali and Samu Castillejo, who each received a score of 6.5.

All the rest received scores of 6 apart from Leo Duarte (5.5), who still appeared very far from his best form.