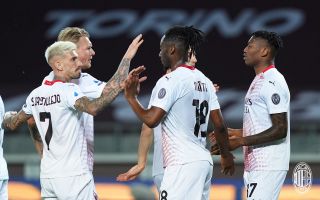 A number of AC Milan players were praised for their performance during last night’s storming 7-0 win over Torino by Tuttosport’s player ratings.

Starting with the best players on the pitch, the paper (via MilanNews) gave each of Theo Hernandez and Franck Kessie a score of 8 out of 10 for their performances. A brace for the Frenchman and one goal for the Ivorian, but Franck was the “master of the midfield”.

A 7.5 was given to the other star of the evening, Ante Rebic, scorer of three goals. Half a point less (7) went to Gianluigi Donnarumma and Brahim Diaz, while a 6.5 rating went to Davide Calabria, Simon Kjaer, Fikayo Tomori, Diogo Dalot, Ismael Bennacer, Samu Castillejo, Hakan Calhanoglu and Rafael Leao.

The only two players to earn a simple 6 out of 10 score were midfield duo Soualiho Meite and Rade Krunic, who came off the bench at half-time and in the second half respectively.