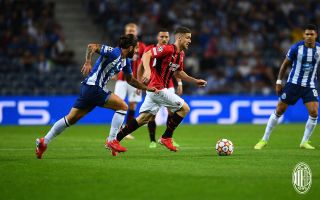 Tuttosport: Milan player ratings from defeat against Porto – eight players get a 5

Only three players were given passing marks after last night’s disappointing 1-0 defeat against Porto last night in Tuttosport’s player ratings.

The Rossoneri have made qualification for the knockout stages a very unlikely possibility after suffering a third defeat on the spin in the competition, and the third by just a solitary goal as Luis Diaz’s second half strike gave the hosts all three points at the Estadio do Dragao.

Tuttosport (via MilanNews) have given their scores for the game and they have awarded only three players with a mark of 6 out of 10: Ciprian Tatarusanu, Simon Kjaer and Olivier Giroud.

On the other hand, the performances of all the other players was negative as a 5.5 was given to defensive trio Fikayo Tomori, Alessio Romagnoli and Pierre Kalulu plus substitute Zlatan Ibrahimovic. Then, a 5 went to Davide Calabria, Fode Ballo-Touré, Sandro Tonali, Ismael Bennacer, Tiemoue Bakayoko, Alexis Saelemakers, Rade Krunic and Rafael Leao.

READ MORE: From Ballo-Toure to Daniel Maldini – Milan’s inexperience costs them on the big stage