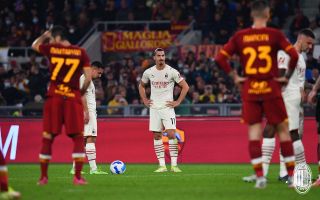 Simon Kjaer was the best player on the pitch for AC Milan last night during the big 2-1 win over Roma at the Stadio Olimpico, according to Tuttosport.

The paper (via MilanNews) have published their player ratings for the game last night and have awarded Kjaer with a 7.5 out of 10 after his ‘excellent performance’ against the Giallorossi, especially when Milan were down to ten men and were defending with their backs against the wall.

The Dane was followed by Zlatan Ibrahimovic who also got a 7.5 as he was the scorer of the goal to make it 1-0 and he won the penalty that doubled the advantage. There were excellent performances from Ciprian Tatarusanu, Franck Kessie and Ismael Bennacer too as they got a 7.

Fikayo Tomori, Alexis Saelemaekers and Rafael Leao got a 6.5 while Rade Krunic and the substitutes got a 6. Theo Hernandez was the only player who got marked down as he got a 5 for picking up two yellow cards and putting his team in difficulty.