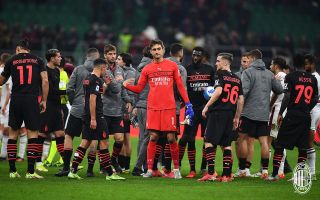 Olivier Giroud was the match-winner for AC Milan last night against Torino but he was not the man of the match, according to Tuttosport’s player ratings.

According to this morning’s edition of the Turin-based newspaper (via MilanNews), Sandro Tonali was the best on the pitch for the Rossoneri during last night’s hard-fought victory as the young midfielder was a ‘gladiator in the middle of the field’ and that is why he earned a rating of 7.5 out of 10.

An excellent performance was also on display from Fikayo Tomori and Olivier Giroud who deserved a score of 7, while Ciprian Tatarusanu got a 6.5 as the Romanian did well to stop the Sanabria shot in the second half.

A 6 went to Davide Calabria, Alessio Romagnoli, Simon Kjaer, Theo Hernandez, Rade Krunic, Ismael Bennacer and Rafael Leao, while a 5.5 instead went to Franck Kessie. The trio who struggled were Pierre Kalulu who did not look comfortable on the left, Tiemoue Bakayoko who is still behind in condition and Alexis Saelemaekers who was not in the game much – all got a 5.