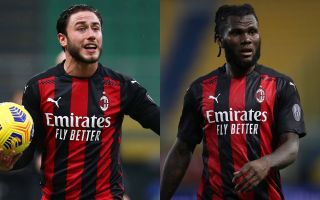 Davide Calabria and Franck Kessie have been two of the best Milan players this season, and thus it’s no surprise that the Rossoneri want to renew their contracts. Both will expire in 2022, meaning it’s time to start the talks.

As reported by Tuttosport this morning (via MilanLive), Milan have initiated talks with the agents of the players as they are keen on the renewals. And in both cases, the desire to continue together emerged but the economic details are different.

Kessie’s renewal is the most complicated as after a stellar season, his agent has put forward a request of €5m per year. The Ivorian currently earns €2.2m per year and Milan know that a pay rise is needed, but they want to close it at less than €5m.

The Calabria case, on the other hand, is different as the Primavera product earns €1.1m per year and has asked for €2m plus bonuses. This is a figure that Milan are comfortable with and thus an agreement will be easier to find.

READ MORE: Juve and PSG approached Milan star but talks are not concrete – the latest