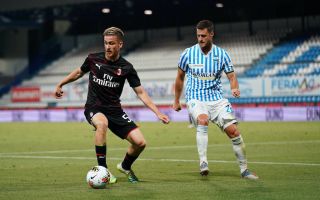 Alexis Saelemaekers was the best player on the pitch for AC Milan during their dramatic 2-2 draw against SPAL on Wednesday night, according to Tuttosport.

The newspaper Tuttosport (via MilanNews) gave Alexis Saelemaekers a 7 out of 10 on the day it was announced he will be joining permanently on a four-year deal in the summer.

Hakan Calhanoglu’s performance (6.5) was also excellent, as was Ibrahimovic’s (same mark). Donnarumma, Calabria, Romagnoli, Laxalt, Paquetà and Leao all scored a 6, but then things start to turn sour.

Matteo Gabbia struggled and was awarded a 5, as was Rebic who got the following comment: “Absent in this game, after so many performances as absolute protagonist.”

It was a 5.5 rating, finally, for Theo Hernandez, Kessié and Bennacer.