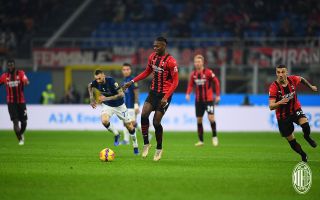 Ciprian Tatarusanu was the stand out performer for AC Milan during their derby draw against Inter at San Siro last night, Tuttosport report.

In today’s player ratings, the paper (via MilanNews) gave the highest score to Tatarusanu (7.5) who was decisive in the first half when he saved a penalty from Lautaro Martinez, and in addition to that looked far more confident overall in commanding his area.

There were positive performances also from Davide Calabria, Fikayo Tomori, Sandro Tonali, Ismael Bennacer and Alexis Saelemaekers who all got a 6.5, with the Belgian inches away from a last minute winner as he fired from range.

Pierre Kalulu, Rade Krunic, Rafael Leao and Ante Rebic all got a 6 while half a mark less (5.5) went to Simon Kjaer, Brahim Diaz, Franck Kessie and Zlatan Ibrahimovic, while the lowest rating went to Fode Ballo-Touré who got a 5 for conceding a penalty and being dragged off at half-time.

READ MORE: An unlikely hero emerges for Milan during derby draw against Inter