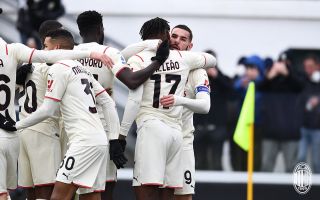 AC Milan kept up the pressure on rivals Inter by taking care of business against Venezia on Sunday afternoon, beating Paolo Zanetti’s side 3-0.

Tuttosport (via MilanNews) have published their player ratings for the game in this morning’s edition and the the award for the man of the match rather obviously went to Theo Hernandez, as the Frenchman wore the captain’s armband again, scored a brace and thus deserved an 8 out of 10.

There were excellent performances also from Pierre Kalulu and Rafael Leao, who got a 7 with the latter getting a pair of assists, while half a mark less was given to Tiemoue Bakayoko, Ante Rebic and Zlatan Ibrahimovic.

A 6 was awarded to goalkeeper Mike Maignan, defenders Alessandro Florenzi and Matteo Gabbia, midfielder Sandro Tonali and winger Junior Messias. A 5.5 went to the playmaker Brahim Diaz, and finally a 5 to Alexis Saelemaekers who got a yellow card and came off at half time.