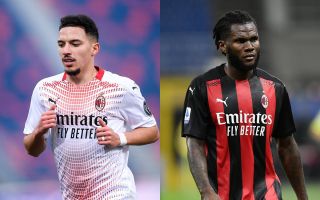 Tuttosport: Milan ready to increase wages of key duo – the figures they have in mind

Milan are enjoying their best season in a very long time and they have their players to thank for it, as well as manager Stefano Pioli. Therefore, they are eager to lock them all down, not willing to part ways.

They certainly don’t want more situations similar to those of Gigio Donnarumma and Hakan Calhanoglu, although there is optimism on that front. Franck Kessie is one of the players that will expire in 2022, making him a priority.

As reported by Tuttosport (via MilanNews), Milan want to renew the contracts of Kessie and also his midfield partner Ismael Bennacer. The latter has a contract until 2024, but his salary (€1.7m per year) isn’t quite up to par with his performances.

Kessie currently earns €2.2m per year and with the new agreement, he will certainly exceed €3m (with bonuses). The same figure could be given to Bennacer, who has a €50m release clause in his contract. Perhaps that will be removed.

READ MORE: Another chance for Chelsea loanee Tomori to show his qualities with Milan