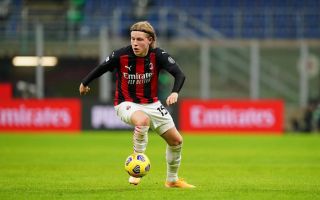 Tuttosport: Milan reject offers from Bundesliga and Serie A for Hauge and Krunic – the details

AC Milan have rejected incoming offers from clubs in Italy and abroad for two of their players, according to a report.

Even though a lot of the focus is on the incoming market and potential signings that could be made, there is also the possibility that some players will leave in order to generate funds and make some room in the squad.

According to reports from Tuttosport this morning (via MilanNews), Milan have rejected loan requests from the Bundesliga for Jens-Petter Hauge. In particular, one came from Bayer Leverkusen who asked for the Norwegian winger until the end of the season.

Meanwhile, the paper adds that the Milan management have received a lot of requests for Rade Krunic given that he appears to be on the fringes of Stefano Pioli’s plans. Torino, Fiorentina, Genoa and Bologna have all asked for information on the player’s situation, but the Rossoneri will not sell this month.