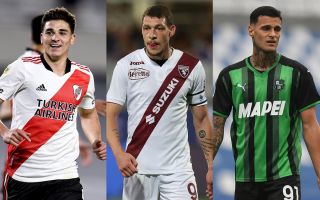 Tuttosport: Milan have a seven-man short list to reinforce the attack next summer

In addition to the January plans, AC Milan are also focused on the future and of the positions that need reinforcing in that sense is centre-forward one. Zlatan Ibrahimovic and Olivier Giroud aren’t getting any younger, after all.

Paolo Maldini and Ricky Massara are well aware of the situation and they are always keeping an eye on the market for opportunities. According to Tuttosport (via MilanNews), there are seven players in particular they have set their sights on.

Andrea Belotti, who has been linked with the club for ages, is still an option as he finally seems ready to leave Torino. Then there are the three South Americans on their wish list: Julian Alvarez (River Plate), Agustin Alvarez (Penarol) and Darwin Nunez (Benfica).

Last summer, Milan also thought about Gianluca Scamacca and a renewed interest shouldn’t be ruled out. Randal Kolo Muani, who will be a free agent in the summer, has also been mentioned. The dream, however, is Patrick Schick (read more here).