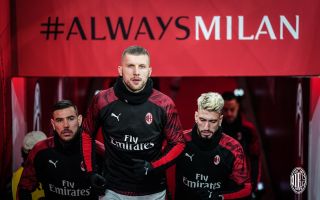 AC Milan have been told they must pay a big fee if they wish to land winger Ante Rebic on a permanent basis, a report claims.

The Croatia international has completely turned his fortunes around so far in 2020, having scored seven times in all competitions since the turn of the year.

Rebic has contributed to eight of Milan’s last 14 goals in all competitions when factoring in his assist against Torino in the Coppa Italia.

Given the fact that at present he is only hear on a loan until the end of next season, there has been talk among various media outlets that Milan are already at work to make that a permanent deal.

According to Tuttosport though – as cited by MilanNews – Eintracht Frankfurt have asked Milan for €40million for the outright purchase of the 26-year-old.

The newspaper adds that the demand is so high because 50% of the future resale of the Croatian will have to go to Fiorentina as per the clause in the deal when they signed him.