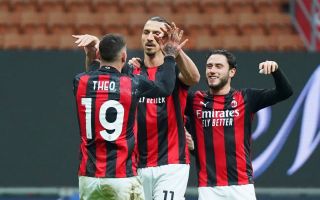 Tuttosport: Milan turn attentions to Lazio but presence of star duo is in doubt – the latest

After defeat against Sassuolo – which could have serious repercussions on the Champions League race – Milan are already thinking of Monday.

As Tuttosport writes (via MilanNews) the Rossoneri will take to the field at the Olimpico against Lazio, a match that becomes decisive for the fate of Pioli’s team, but there are some doubts about who will be available.

Zlatan Ibrahimovic will do everything to be in Rome after the Swede missed the match against Sassuolo due to a tweak in his left calf, and the paper assured that at Milanello there is optimism about his recovery, but the affected muscle is one of the most delicate and you have to be careful.

A calf problem also stopped Theo Hernandez as the Frenchman reported a contracture and his conditions will be evaluated day by day. He too, like Zlatan, is in doubt for Lazio. On a positive note, Ismael Bennacer should instead return as he was stopped by a bruised ankle that is nothing too serious.