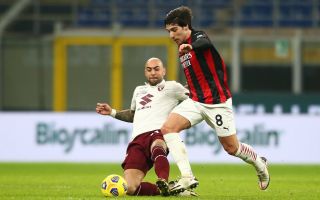 Tuttosport: Milan waiting for approval of Elliott to push through €10m-plus-player deal

AC Milan are waiting for the approval of Elliott Management in order to complete the Sandro Tonali operation, according to a report.

The Rossoneri seem to be locked in a tug-of-war with their Lombardy neighbours over the talented midfielder as they wish to try and amend the original terms of the deal struck last summer, which was a €10m loan with a €15m option to buy plus €10m in bonuses and a 15% future resale percentage.

According to the latest from Tuttosport (via MilanNews), this is the week in which the midfielder will become a Rossoneri player outright. Milan and Brescia have reached an agreement on the basis of €10m plus Giacomo Olzer as a counterpart, while Lorenzo Colombo will eventually have a separate discussion.

For the full agreement to be pushed through, only the green light is awaited from Elliott Management and then the 21-year-old can put pen to paper and permanently join his boyhood club.