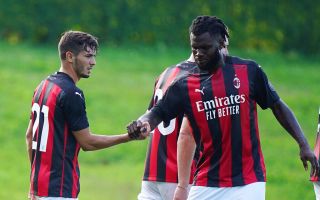 AC Milan’s city rivals Inter have twice tried to sign Franck Kessie, a report claims, but the midfielder has always wanted to succeed with the Rossoneri.

According to what is being reported by Tuttosport (via Calciomercato.com), the Milan management know that they must try and sort out his renewal situation at some point, given his contract expires in 2022 and they want to avoid a repeat of the Donnarumma and Calhanoglu situations.

There have been two attempts by Inter to try and sign Kessie as a gift to Antonio Conte, who is a huge admirer of the former Atalanta man. Last January there was the offer of a swap deal involving Matias Vecino, then a new attempt in September.

However, the Nerazzurri got nowhere for the simple reason that Kessie wants to stay at Milan and succeed, and now Milan want to resolve his long-term future.