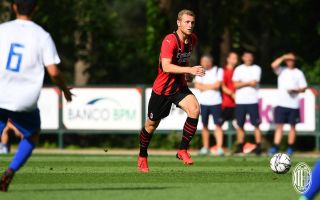 AC Milan could still decide to let midfielder Tommaso Pobega leave on loan with two clubs interested in signing him, a report claims.

There has been an abundance of speculation about Pobega’s future as he returned to Milan after a loan spell at Spezia, with suggestions that he could either be sold for a capital gain, loaned out again or kept around to be a fourth choice holding midfielder.

According to the latest from Tuttosport (via MilanNews), Sampdoria and Cagliari have asked Milan for information about Pobega and whether they would consider letting him leave again. The paper explains that Rossoneri will only let the 22-year-old leave if another midfielder arrives at Milanello.

That is a distinct possibility too given Stefano Pioli may want a more natural player for the double pivot, and the report mentions that Tiemoue Bakayoko of Chelsea remains the leading candidate to come in and complete the defensive midfield department.