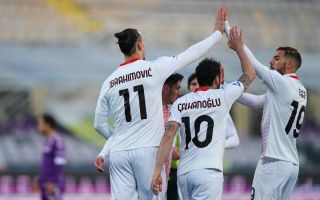 Tuttosport: Milan’s Scudetto dream has not yet vanished after show of character vs. Fiorentina

AC Milan shrugged off the disappointment of back-to-back defeats in Serie A and the Europa League to beat Fiorentina 3-2 on Sunday.

As Tuttosport writes (via MilanNews), despite the many injury problems yesterday marked another heartfelt and mature performance from Stefano Pioli’s team. Slowly many players are finding their best form – especially the impactful ones like Hakan Calhanoglu – who scored the decisive goal. Ismael Bennacer also came on and had a great impact when he entered the pitch.

With Juve’s defeat at home to Benevento, Milan are the only team that is trying to stay in the reach of Inter, who at the moment are 6pts ahead of the Diavolo with a game in hand. The Rossoneri are not giving up and, deep down, they continue to hope for the Scudetto.

After the game, Pioli said: “Scudetto? We will see, now we just have to think about winning the games we have left. We have ten: we have to win. Then we’ll do the math and see where we have arrived. Ibra talks about the Scudetto? It’s good. We have been in the lead for I don’t know how many days. We have said something to each other in the locker room: fate also depends a little on us. we have seen that all the matches of this Serie A are difficult.”

When Ribery put Prandelli’s team ahead it seemed like being another evening of disappointment. However, there was a reaction from Milan and in the end three gold points arrived. Thanks to this success, the Scudetto dream has not yet completely vanished.