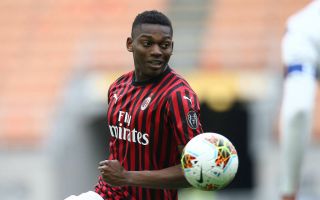 Tuttosport: Napoli forced to look for Osimhen alternatives – Rafael Leao among the names

Napoli are considering a shock move for AC Milan striker Rafael Leao if their deal for Victor Osimhen falls apart, a report claims.

Leao has often been criticised by fans and the media for a lack of consistency since his arrival from Lille, and there have also been questions about his attitude, but he has shown positive signs since the resumption of Serie A.

The Portugese starlet has netted three times since the league got back underway, scoring in the 4-1 win at Lecce, the 2-2 draw at SPAL and the incredible 4-2 comeback win over Juventus.

According to the latest from Tuttosport (via MilanNews), there may be a chance for Leao to have a fresh opportunity elsewhere in Italy.

Given the difficulties Napoli are having in signing Victor Osimhen from Lille, the Partenopei are looking around and among the alternatives that they are evaluating is Rafael Leao, who last summer was wanted by them before he joined Milan from Lille.