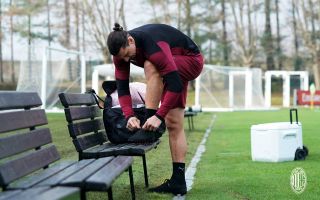 Some positive news has emerged regarding the fitness of Zlatan Ibrahimovic after his latest setback.

MilanNews reported how at the end of Friday’s training Ibrahimovic felt pain in his left calf. The MRI revealed hemorrhagic suffusion in his soleus muscle, with a test to be carried out in 10 days at the earliest.

According to Tuttosport (via MilanNews), Ibrahimovic’s 2020 is over, however Ibrahimovic’s muscle problem appears less serious than expected.

The Swede will still have to carry out a check before the end of the year, but his return doesn’t seem as far as initially worried. Some were worried that it could take more than a month for him to recover, with Milan therefore without him for 10 matches, but the paper confirms that Ibra could be back for the big match with Juventus.

He would miss only the first match in 2021 if that were the case, the one against Benevento on January 3. Much, however, will depend on the subsequent routine checks.