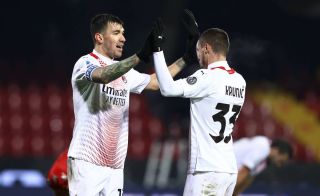 Tuttosport: Pioli asks for depth to be retained meaning midfielder and defender will stay

AC Milan boss Stefano Pioli does not want to lose any members of his current squad that he considers to be key for depth, according to a report.

This morning’s edition of Tuttosport (via MilanNews), Pioli has effectively closed the outgoing market for Milan and it is now almost certain that all with remain, aside from the uncertain situations surrounding Samu Castillejo and Andrea Conti, the latter of whom was left out of the squad again for today’s game against Cagliari.

The paper claims that even captain Alessio Romagnoli is considered off limits for any potential bids that may arrive, despite the fact his contract with Milan will expire in June 2022. Rade Krunic will also almost certainly remain, even if the arrival of Tiemoue Bakayoko might result in less playing time.

The Rossoneri coach made a precise request as he has repeatedly stressed the importance of having depth full of starter-level players.