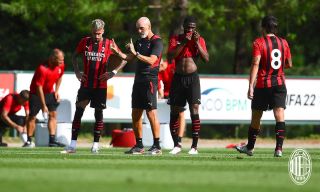 AC Milan got their 2021 summer preseason campaign off to an ideal start by beating Serie C side Pro Sesto 6-0 at Milanello.

This morning’s edition of Tuttosport (via MilanLive) have taken a look at some of the tactical indications we saw yesterday from head coach Stefano Pioli, who theoretically presented the starting XI in the expected 4-2-3-1 that has become his favoured formation, but evident tactical changes were noted during the course of the game.

Pioli’s side seemed to transition to a sort of 3-5-2 in possession, something we have seen Milan do many times, with Gabbia, Tomori and Romagnoli playing tighter on the defensive line. Castillejo and Theo Hernandez were the wide men called to push on in possession, with Krunic, Tonali and Bennacer the midfield three. Rafael Leao and Daniel Maldini were the front two.

The paper also writes that in a way Pioli’s system has emulated the way that Roberto Mancini’s Italy played in the European Championships, starting with a 4-3-3 that turned into a 3-5-2 in possession with Di Lorenzo’s stepping back as an additional centre-back and Spinazzola pushing forward.

Of course, it must be noted that Pioli was also somewhat making virtue out of necessity given he lacks a pure attacking midfielder and did not have either of Ibrahimovic or Giroud.

READ MORE: Tomori opens up on joining Milan from Chelsea, his goal vs. Juventus and what Giroud will bring