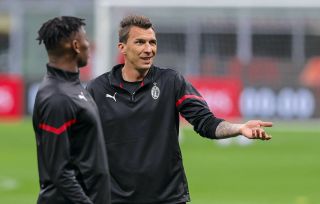 AC Milan boss Stefano Pioli is considering the potentially bold decision to start Mario Mandzukic, according to a report.

Mandzukic’s arrival in January was supposed to help Milan guarantee a top four spot and add another element of leadership to a young group that even had potential Scudetto aspirations at that point.

However, a number of injury problems have meant that the 33-year-old has failed to make a mark at all, without scoring even once. As reported this morning by Tuttosport (via MilanNews), Stefano Pioli has not yet made a decision, but is considering the possibility of fielding Mandzukic as a starter on Sunday evening against Atalanta, in a decisive match for the team’s top four fate.

For a player of the Croatian’s caliber and pride, leaving Milan with a place in the top European club competition would be a nice way to say goodbye, given he seems unlikely to be given a new deal. The next training sessions will be key to understand if the former Juve man will really be deployed from the first minute or if Pioli will prefer to give continuity to Ante Rebic as a centre-forward. Mandzukic’s physical condition will obviously be decisive too.

READ MORE: Milan committed a sin in the January transfer window – an error to be rectified this summer