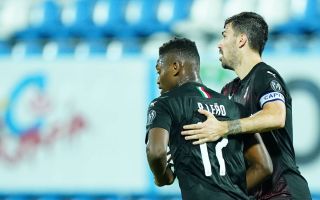 AC Milan could sell two big names in order to generate funds for the summer transfer window, according to a report.

Tuttosport (via MilanLive) writes that the Milan management has identified – with the approval Stefano Pioli – two players elements to be put on the market in order to generate money that would be reinvested in the team.

The duo in question are centre-back and captain Alessio Romagnoli plus forward Rafael Leao. The paper claims that Romagnoli has had his suitcases packed for some time having lost his starting spot to Fikayo Tomori, who arrived on loan from Chelsea in January.

The former Roma defender also has a contract expiring in June 2022 and – given Raiola’s high requests regarding a renewal – Milan appear inclined to sell the 26-year-old to the highest bidder in the coming months. This would also be to avoid situations similar to those of Donnarumma and Calhanoglu and the risk of losing Romagnoli for free.

Leao meanwhile could be put up for sale because he has never fully convinced. The Portuguese forward, although still young, has shown his quality only in flashes and has not repaid the trust put in him by Pioli in 2021.

There are still no concrete proposals for either player, but Milan is certainly ready to listen to any kind of bid around €30-35m, in order to obtain an important amount to invest in ‘more functional players’.

READ MORE: Milan have no doubts about head coach position heading into next season