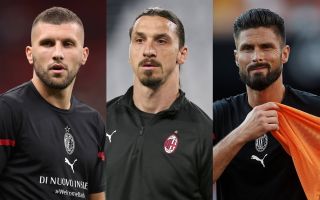 Tuttosport: Pioli has three different attacking solutions for the next three clashes

After the international break, AC Milan will take on the likes of Lazio, Liverpool and Juventus. Stefano Pioli will have a lot to think about with regards to the Starting XIs, therefore.

The three games will be played in the span of a week and, therefore, Pioli most likely won’t be able to field the same XI for all three games. As reported by Tuttosport (via MilanNews), he has a plan for the attack.

Against Lazio, Ante Rebic is expected to play as the centre-forward, given that Olivier Giroud has Covid-19 and Zlatan Ibrahimovic has only just returned to training. For the Liverpool clash, though, the Swede should make his return.

However, for the game against Juventus, Pioli seems keen on trying the Ibra-Giroud duo up front, thus playing with a 4-4-2. In other words, we could see three different attacking solutions for these three games. Hopefully, the result will be positive.

READ MORE: Milan have already written their midfield future with Adli and Bakayoko