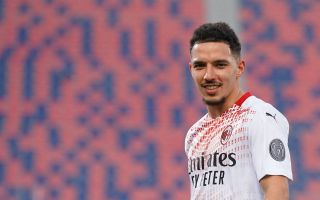 Tuttosport: Pioli ready to welcome back a key pillar as Bennacer warms up for return

AC Milan have missed the presence of Ismael Bennacer in their midfield, but on Sunday they will be able to finally welcome him back.

As this morning’s edition of Tuttosport reports (via MilanNews), the Rossoneri have had to battle losing several of their key performers already along the way this season but have proved they have a squad and a game system better than most thought.

The return of Bennacer will be crucial though. The Algerian has warmed up his engines against Bologna, coming off the bench after almost two months of absence, and is now ready to take back a starting shirt.

Bennacer played for half an hour at the Renato dall’Ara, despite the long period of forced stop, and against Crotone – most likely – he will start from the beginning alongside Frank Kessié, his ideal partner in the middle of the field.

Tonali will make way for him, as he has not completely convinced in his first few months with the Rossoneri. The young midfielder has not (yet) performed according to the expectations of the club, and therefore it becomes an easier decision to slot Bennacer straight back in.