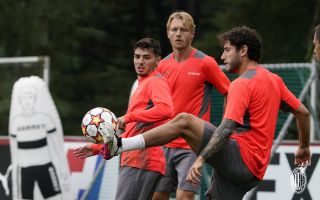 Tuttosport: Pioli to deploy Calabria on opposite side to normal vs. Porto – the reasons

AC Milan boss Stefano Pioli will field Davide Calabria on a different side to the who he is used to tonight when the Rossoneri take on Porto in the Champions League.

Theo Hernandez is out for the game due to testing positive for Covid-19, and Tuttosport (via MilanNews) reports that Pioli has identified Calabria as the ideal player to replace the Frenchman because Fode Ballo-Touré did not fully convince against Verona during Saturday’s win.

Tonight Milan need the three points against Porto which is why Pioli will rely on the players who have offered certainties since his arrival, and it does not need explaining that Calabria is a pivot of the team.

The first signs of such a move came during the game against Verona during which Calabria did not take up a typical right-back position but instead gradually faded towards the centre, the paper writes, going to occupy that intermediate corridor that is usually the one attacked by Theo.