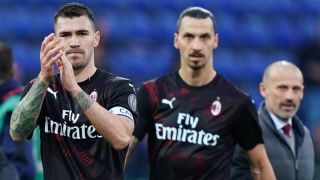 Tuttosport: Pioli to rely heavily on three of his loyalists but their future at Milan is uncertain

AC Milan head coach Stefano Pioli will rely on three of his loyal servants once the season resumes to try and achieve the highest finish possible.

According to Tuttosport on Friday (via MilanNews), Pioli is at work at Milanello because he wants to close the season well. To do so, the 54-year-old will rely above all on three players who are also the backbone of current Milan: Gianluigi Donnarumma, Alessio Romagnoli and Zlatan Ibrahimovic.

However the paper goes on to note how the future of these three players is also rather uncertain, especially given Ibrahimovic’s deal expires on June 30, Donnarumma’s runs out next year and Romagnoli the year after that.

For the Swede, the most probably hypothesis is that he leaves once the season ends, because he does not agree with a lot of the recent choices made by the club.

Donnarumma’s stay at Milan next season is practically impossible without a renewal as if he does not sign a new deal, the club risk losing him for free next year so they would likely sell in the summer.

The situation of captain Romagnoli is less problematic as his deal expires on 30 June 2022. There is therefore no particular hurry, but waiting too long could cause another uncomfortable situation such as what the club are facing now with Donnarumma.