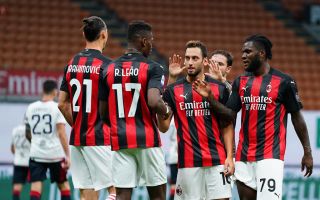 AC Milan are one step away from securing the renewal of one of their best performers since the resumption of Serie A, a report claims.

Hakan Calhanoglu racked up nine goals and nine assists in Serie A this season, exploding after lockdown as he netted six goals and added eight assists.

His form, plus the fact his current contract is set to expire in less than a year (June 2021) sparked rumours that Manchester United are interested in his signature, as well as several clubs in Germany.

However, Sunday’s edition of Tuttosport (via MilanLive) reports that Calhanoglu is not interested in seeking a new club and instead is all set to renew his contract with Milan.

The Turkey international has agreed a new deal until 2024 which will see him earn €3million net per season, therefore €6m gross and a €24m total commitment from the club.

The news cements the idea that Calhanoglu will be one of the most important players of Pioli’s side. His desire to play the Champions League is strong, but it is coupled with the desire to bring Milan back to the levels of the past.