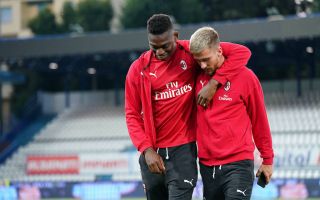 A positive update has arrived regarding the three attacking players who are currently out injured for AC Milan, a report claims.

The Rossoneri are currently without a trio of important players in Zlatan Ibrahimovic, Rafael Leao and Alexis Saelemaekers, which forced Stefano Pioli to make some rotations for Thursday’s draw against Lille.

This morning today’s edition of Tuttosport (via MilanNews) takes stock of the injury situation, explaining that there is optimism in Milanello regarding the conditions of Ibrahimovic, Leao and Saelemaekers.

First of all, the Belgian is the closest to returning to the field and it sounds like it won’t be long until he’s back. He has a sprained ankle which does not appear to be too severe.

Meanwhile, both Ibrahimovic and Leao – both of whom are currently struggling with a muscle injury – want to shorten their recovery times and be back available to the team as soon as possible.