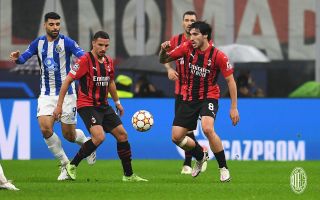 There were not many players who escaped from last night’s draw against Porto with a positive score in Tuttosport’s player ratings.

AC Milan went into the game against the side who are currently top of the Primeira Liga knowing that they essentially needed a win to keep alive their already slim chances of making the Champions League knockout stages, but they were made to settle for a 1-1 draw.

Tuttosport (via MilanNews) have published their player ratings and they complimented Sandro Tonali for his performance in the midfield as he ‘magnetised the ball and seems to get everywhere’. Substitute Pierre Kalulu also did well and got a 6.5, giving ‘pure energy’ to the right side.

A 6 went to Ciprian Tatarusanu for a ‘great save on Grujic’ as well as well as Alessio Romagnoli, Theo Hernandez, Ismael Bennacer, Rafael Leao and Olivier Giroud. A 5.5 went to Davide Calabria, Fikayo Tomori, Rade Krunic, Alexis Saelemaekers and Brahim Diaz as they ‘failed to make an impact’.

READ MORE: Pioli believes derby is not ‘decisive’ as he gives update on Calabria and Rebic’s condition