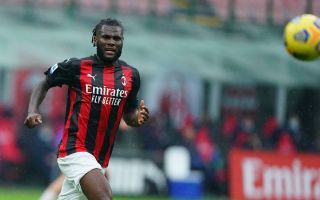 Milan have picked themselves up after what was a tough start to 2021, following a 2020 with great results. They are not quite out of the woods yet, but Franck Kessie is one of the players that has stepped up amid the injury crisis.

The midfielder was outstanding in the mid-week clash against Man Utd, completely dominating the midfield from start to finish. Milan eventually managed to clinch an important draw, as Simon Kjaer scored the equaliser in injury time.

Kessie had a wonderful goal controversially disallowed in the first half, so things could have been better for the Rossoneri. According to Tuttosport (via MilanNews), the Ivorian has attracted interest not only from Premier League, but also Real Madrid.

The Bernabeu side, in fact, have already initiated contacts with Kessie’s agent to understand the contractual situation. However, Milan are confident that they can reach an agreement on a renewal, ready to offer a necessary pay rise.