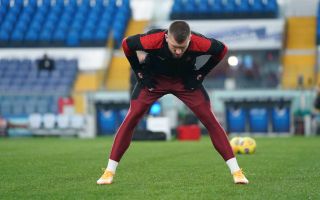 Tuttosport: Rebic crucial to Milan despite firing a blank – if a goal does not arrive, he creates

Ante Rebic is playing in a role that is not his natural one and does not yet have a goal to his name this season, but he is still contributing.

Milan have had to contend with Zlatan Ibrahimovic’s thigh problem, meaning Stefano Pioli will once again lean on Rebic to be the striker in the absence of a true deputy.

Not only that, but Rebic has only recently come back from an elbow dislocation which kept him out of action for a few weeks, but he is now back to full fitness and ready to contribute once again, despite admitting he prefers playing on the left wing.

As Tuttosport (via MilanNews) reports, Rebic’s characteristics and movements mean he is a natural offensive winger, and while last season shows he has an eye for goal it is perhaps because of the space he is afforded playing on the left side, which he does not get up front alone.

Rebic nevertheless has left his mark as an assist specialist, amassing four in the last five games. It just goes to prove that even when he isn’t scoring, the Croatian is able to make a great contribution to the cause.

IMPORTANCE – Rebic is not yet in top form, but in the midst of various individual difficulties he still managed to lend a hand to the team with key assists. In short, if a goal does not arrive, he creates one.