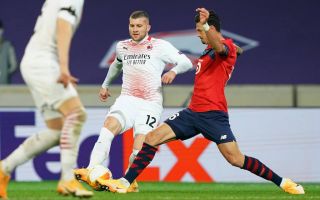 Tuttosport: Rebic shows a different side to Milan’s attack – now he searches for his first goal

Ante Rebic will once again be called upon to play a role that is not his first choice when AC Milan host Fiorentina on Sunday.

As Tuttosport reports (via MilanNews), Milan’s strength when compared to recent seasons appears to be their depth and the cohesiveness of the squad. Despite some notable absentees in Lille, Rebic stood out as he is capable of carrying the Rossoneri attack on his shoulders in a different way to Ibrahimovic, but still an effective one.

Against Napoli it was clearly visible how Rebic’s return to the field had positively influenced Milan. The physicality and energy of the Croatian offered a different threat and allowed Theo Hernandez to flourish again, with the Frenchman having his best outing of the season.

Rebic’s favoured position is definitely the left wing, but Ibrahimovic’s injury and Leao’s absence forced him to reinvent himself as a centre-forward. If with Ibra Milan are built around having a target man, Rebic gives speed in behind/

In the last two games against Napoli and Lille, Rebic provided two excellent assists. The first was a soft and precise cross for Ibrahimovic while the second was an intelligent cut-back for Castillejo’s goal.

Rebic though wants to get back to scoring, and against his former team Fiorentina he will go in search of his first goal of the season.