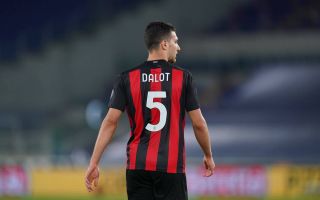 Manchester United manager Ole Gunnar Solskjaer has been left surprised by the fact that Diogo Dalot wants to stay at Milan, a report claims.

As reported by Tuttosport (via MilanNews), negotiations with Manchester United for Dalot have been restarted in a concrete way. The 21-year-old has expressed his desire to stay at Milan beyond the expiration of his loan spell and this surprised Solskjaer a bit, who was convinced to bring him back to Old Trafford for next season.

Not only that, but the paper even claims that the Rossoneri have made a first proposal to the Red Devils to try and keep Dalot, who will have to respond in the next few hours. The full-back is currently at the European Championships with Portugal having been called up due to Joao Cancelo testing positive for COVID, so it is most likely unrealistic to expect a quick resolution to the situation.