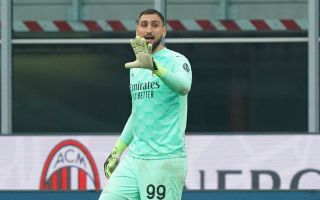 Tuttosport: Steps forward regarding Donnarumma’s renewal as he swears his loyalty to Milan

The renewal of Gianluigi Donnarumma is undoubtedly the issue that needs sorting most urgently by the AC Milan management.

Paolo Maldini and co. know that they simply cannot afford to lose one of the best goalkeepers in the world on a free transfer, but Tuttosport (via MilanNews) are reporting today that there is great optimism regarding the success of the negotiations.

The will of the 21-year-old is to stay, as he himself explained yesterday before the match against Fiorentina in which he was decisive with two great saves on Vlahovic and Ribery.

“If I want to wear this for a long time shirt? Of course, my agent will talk about it with the club, there is no problem. Mino knows what he has to do, the club will see. In the meantime, I want to enjoy this moment,” were the words of Donnarumma to DAZN.

The paper adds that the contacts that have taken place in recent weeks between the Milan management and Mino Raiola have been productive and a definitive agreement could soon be reached.

Donnarumma would be in line for a small pay rise as his salary would go from €6m to €7m net per season. The last aspect to be resolved is the one concerning a potential release clause that the agent would like to insert in case of non-qualification for the Champions League.