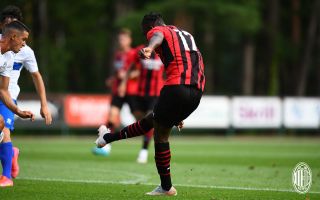 Tuttosport: Tale of two halves for Rafael Leao during Pro Sesto win – what ‘made Pioli annoyed’

AC Milan managed to open up their preseason campaign with an emphatic 6-0 win over Pro Sesto at Milanello, but Rafael Leao was hit and miss again.

With Zlatan Ibrahimovic recovering in the gym continuing his therapies and Olivier Giroud back on vacation, yesterday everyone’s eyes were on Rafael Leao as the Portuguese was used as a centre-forward again, a role he does not particularly like.

As Tuttosport (via MilanNews) reports, for about 20 minutes the 22-year-old forward applied himself, playing off the centre-backs and giving depth to the attack in the absence of a true No.9. He scored a good goal on the counter too, standing up his man well before curling inside the far post.

From the 25th onwards however he fell into the usual problems that he faced towards the end of last season, isolating himself from the game and often ending up wide on the left. The paper even mentions that it ‘made Pioli annoyed’.