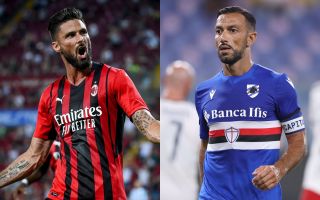 Tuttosport: The battle of the old as Giroud’s Milan take on Quagliarella’s Samp

AC Milan are currently gearing up for what will be their first game of the season tomorrow, taking on Sampdoria away from home. There will be a few interesting internal battles but one in particular.

According to today’s edition of Tuttosport, as cited by MilanNews, the battle between Olivier Giroud and Fabio Quagliarella should be monitored closely. Two fantastic strikers in action, or the battle of the old as the newspaper describes it.

Quagliarella has scored 100 goals for Sampdoria in official appearances and Giroud is keen on proving himself in Serie A. Zlatan Ibrahimovic is out with an injury and responsibility is thus on the shoulders of the Frenchman.

The pre-season provided important indications from the 34-year-old as he scored three goals for the Rossoneri. Two of them came in the final friendly game of the pre-season tour, so he will be ready for the game tomorrow.

READ MORE: Florenzi will be on the bench for Milan’s opener against Sampdoria